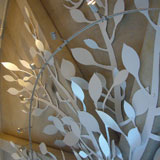 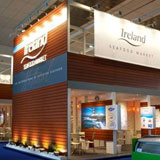 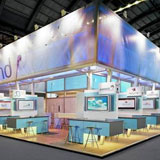 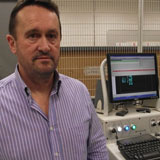 Making an Exhibition of ALPHACAM

Exhibition stands produced by an Irish company for shows around the world are manufactured on a Busellato CNC machine driven by ALPHACAM.

The Busellato, which was installed two years ago, was leading exhibition specialist Display Contracts International’s first CNC machine, and the supplier recommended ALPHACAM as being the perfect software package for their specific needs.

“Whatever we need to cut, whether it’s a particularly complex shape or lettering for our graphics work, ALPHACAM has always been able to do it,” says Managing Director Jim O’Brien. “It’s also very important for the future of our business that ALPHACAM can drive any manufacturer’s machines, because we’ll want to expand with additional machines, and eventually replace the Busellato.”

As well as designing and fabricating full stands and graphics for trade and consumer exhibitions across Ireland, Europe, the Far East, Middle East and Russia, they also build the stands on-site and dismantle them after the exhibition.

The Busellato and ALPHACAM are instrumental in producing many of the exhibition components, from panels for the stands, through to plinths and bespoke furniture such as tables and chairs, along with graphic displays. “ALPHACAM is invaluable in ensuring that the graphic panels are machined perfectly. A lot of our work nowadays is finished with a floor to ceiling graphic, so to be able to cut the panel perfectly square is a huge asset for us.”

The success with their graphic work led to them expanding into providing semi-permanent and permanent exhibits for interpretive centres, which are gaining popularity as new-style museums often at natural or cultural sites, aimed at enhancing understanding of heritage. Interpretive centres featuring exhibits manufactured by Dublin-based Display Contracts International include the Cliffs of Moher which are one of Ireland’s top tourist attractions, Blackrock Castle Observatory’s Cosmos at the Castle, the General Post Office in O’Connell Street, Dublin, and the world’s first cemetery museum at Glasnevin Cemetery in Dublin.

Before the Busellato, everything was produced on traditional cutting machines. “We decided to go for a CNC so we could link directly with digital files," says Jim O'Brien (pictured left). "A lot of the files coming in from our customers can be prepared directly to go on to the CNC machine, and it also gives a much better finish to the end product. With ALPHACAM the finished piece is perfect every time, there’s no human error. It means the Busellato produces perfectly what we feed into it.”

The designs are handled in Autocad and then imported into ALPHACAM for the tooling and CNC program codes to be generated. The code is transferred from the computer to the Busellato through their server.

Display Contracts International was started by Jim O’Brien’s father half a century ago, and the 19 employees moved to their current 16,000 square foot premises in 2009. A number of clients are semi-State boards, such as Enterprise Ireland, the Food Board and the Fisheries Board.  A recent project for Enterprise Ireland involved them making 120 tables in Oak. And they are often called upon to produce touch screen displays in wooden cabinets. “Again, ALPHACAM means we can produce perfect detail in the wood, which considerable enhances the finished appearance.”

ALPHACAM showed its versatility in being equally at home with generating CNC codes for metal as well as for wood, with a prestigious project known as ‘The Tree of Life’ (pictured right) for the Bru Boru Heritage Centre about traditional Irish music and instruments, at Cashel, County Tipperary. “The design of the stylistic tree had to replicate bark, but was actually white-faced aluminium,” says Jim O’Brien. “To get the desired effect the aluminium was CNCd using ALPHACAM programming codes, and the result was simply outstanding.”